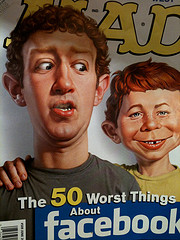 The widespread rollout of Facebook’s Promoted Posts, where fan page owners can pay Facebook to place an ad in their fans’ news feeds for up to 3 days, may very well be Facebook’s “Jump the Shark” moment.

Because the long list of challenges fan page admins already have to endure, coupled with the costs involved for an ad and Facebook users’ inevitable unhappiness over having sponsored content pushed into their news feeds, might be too much for the average user or fan page admin to tolerate.

If you are a business owner who has worked tirelessly on building community and engagement with your fans, you might resent the fact that Promoted Posts means another business owner who hasn’t done anything to engage his fans, can spend some money and get his business back out in front of the eyeballs of his long-dormant fans.

Also, the introduction of Promoted Posts begs the question: “Will I need to spend money on ads for my business in order to stay competitive?” Facebook is encouraging a “yes” answer so much so that it is now providing the % of fans who are reached with each update. The average, non-promoted post rate is a mere 16%. Just think of how many more fans you can reach for a little bit of cash?

From the perspective of the average Facebook user, you might start UN-Liking pages that advertise and be upset with the new prominence and location of these sponsored posts. On platforms like Google search, for example, ads shown in the list of query results are at the top of the page and shaded in yellow, with other ads along the right sidebar. In contrast, Facebook’s “in feed” location means these promoted posts are going to be that much harder for Facebook users to ignore.

Facebook’s EdgeRank algorithm already controls and limits what each user is shown in their streams. So in a lot of ways, the implementation of Facebook’s Promoted Posts is one more step toward removing the “social” aspect from “social media”.

But who knows – maybe Facebook jumping the shark will turn out to be the greatest thing to happen to Google Plus.