Whether they are aware of it or not, every person on Twitter has a method to their following madness. I was recently asked by a client how I determine what accounts to follow, and as I shared the list of things I consider when deciding to follow back, I thought more about the psychology involved when a user first views another’s Twitter profile.

I’ve previously written about how not following back on Twitter can hurt your business. Unless you are Justin Bieber, you aren’t doing your business any favors (nor are you capitalizing on the awesome of social media) if you only follow back a tiny fraction of users who follow you.

There’s a similar occurrence that I see with personal users, but one that typically involves a deliberate gaming strategy. You often encounter this when a Twitter user with an extremely low Following number (in comparison to their Followers number) reaches out to you and a bunch of other users by following your handles. Many of those accounts will then follow the Twitter Snob back within a few days’ time. A week or so will pass by, and the Twitter Snob unfollows those same accounts, ultimately expanding the giant spread in their Following vs Followers numbers.

The goal of the Twitter Snob is to create the illusion of importance and “celebrity” by doing this. 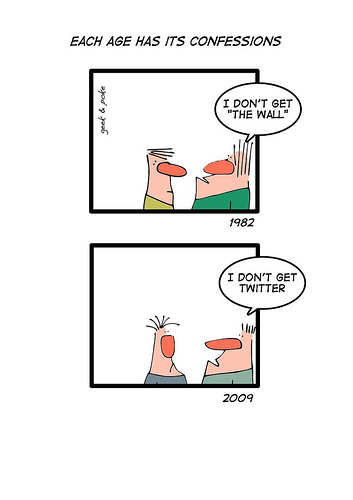 It can be hard to tell if these users are Twitter newbies, trying to play the numbers game (and failing miserably) or just plain don’t get the gist of Twitter. When Following vs Followers numbers are just as skewed – but in the opposite direction of the Twitter Snob – it doesn’t bode well for receiving follow backs from legitimate Twitter users.

If you are following 3+ times as many users as who follow you back, you need to slow your following roll. Instead, spend time engaging with those you already follow, and perhaps even consider unfollowing some accounts that aren’t relevant to you and what you tweet about.

The “All About the Numbers” Folks

Attaining a whole bunch of Twitter followers is pretty easy. In fact, Twitter is the easiest of all social platforms to increase your numbers quickly (So much so, that Twitter imposes a limit on how many accounts you can follow in 1 day).

People who are all about the numbers have 1 of 2 Twitter Following/Follower ratios. Some All About Numbers users have a higher Followers count than Following, with both numbers in the 5 digits. The reason why the average Twitter user does not follow anyone with these kinds of Following/Followers numbers is because at those incredibly-high numbers, those people are typically focused on amassing an incredible number of followers, and personal, one-to-one connections are nearly impossible.

If an All About the Numbers user’s Following to Follower ratio tips in the other direction – say, Following: 45,000; Followers: 42,000 – it’s clear that user is focused purely on actively following a bunch of users – any users – in hopes they will receive follow backs (to continue to increase their numbers). This group of users tends to incorrectly assume that higher numbers = more importance and relevant influence. And again, the likelihood of one-to-one connections is slim.

Most users fall into this group. The ratio of Following to Followers can go either way, but all in all, is much closer than the ratios seen with the Twitter Snob and the Hot Mess. If you’re an Average Joe who follows a lot of celebrities, athletes or news sources, for example, you will most likely not be followed back by those accounts. So, an Average Joe might follow 700 people and have 615 followers, and that’s OK.

Conversely, an Average Joe who’s been active on Twitter for a while will very likely have a noticeably lower Following number than Followers. Why? Because as time goes by, a veteran Twitter user can spot spam accounts, bots, Hot Messes, Snobs and All About Numbers Folks from a mile away, and knows to steer clear.

Each person’s goals and intended use of Twitter is different. So how you plan to use Twitter can be very different than how I do, and that’s fine. Also, there are no absolutes with any “first impression”. For example, I know a few Twitter users with a tremendous amount of Followers and Following, who really do respond and interact with everyone.

But just like in the offline world, first impressions can mean everything. It’s important to consider the psychology involved because the numbers displayed on your Twitter profile will undoubtedly be part of what a person uses to formulate that first impression.

Post-writing but pre-publishing of this post, I came upon this fantastic blog post by Jessica Lee at BruceClay.com. In short, Jessica had a pretty significant Twitter epiphany regarding her Following habits, the lack of real conversation she was experiencing, and how much she had grown to dislike Twitter. I loved reading about how she worked through that epiphany and her reasoning for moving forward in the way that she did.