Why Big Business Needs to Rethink Its Priorities 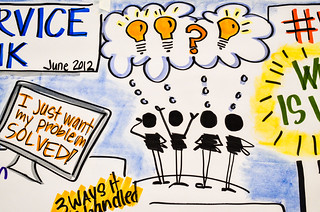 Too often, consumers find themselves getting the short end of the stick when doing business with a mega-company or market leader. This doesn’t happen all the time, and it definitely doesn’t have to happen. But the big companies with a real customer service focus like Zappos and Amazon are much too few and far between in today’s marketplace.

How Big Business can be Bad for Service-Savvy Consumers

Typically, it’s much more difficult to get a question answered or a problem solved in a large organization. And I’m not just talking about long wait times on hold, following a long series of prompts, or having to seek help from a less-than-stellar customer service agent who just happens to be the one taking your call. It’s also the contradicting information you get when asking multiple people the same question, speaking to a different rep every time you call instead of 1 person who is already familiar with your situation and needs, and all the lame-but-common excuses like, “There’s no record of that in my system.”

Fresh on the heels of a move, I’ve been recently versed in what it’s like dealing with big business service providers, including a couple that operate using customer contracts.

More than $100 a month for a standard cable package and a couple DVRs?

(And really, how many of those channels do we watch?)

We wanted to drop DirecTV entirely and just use apps for the channels we actually watch, but we are in a contract with DirecTV that hasn’t ended yet. We’ll keep paying for now, but will change our way of watching TV (and writing hefty cable checks) once that contract is up.

The problems we had with our home security company were nothing short of deplorable, and even though we eventually, painfully came to a resolution where both sides were satisfied, I can guarantee that once our contract is up, we will never do business with that company again.

What many big businesses and market leaders fail to take into account are the small, newer companies who are putting the customer first in everything they do, and the changing technologies that allow people to design their own experiences. For example, there are home security companies out there that do not require a contract and that allow you to choose what type of coverage you want. You can even select exactly what components and sensors you want added to your home. Better yet, monthly monitoring is half the cost of what we pay right now.

Switching gears to cable television…with smart TVs, the ability to stream media, easily renting (or purchasing) an entire season of your favorite show, and using apps on your tablets or laptops, it’s hard to believe there’s a viable future for the cable providers who limit you to channel packages they’ve designed, at the high prices they charge, and with the use of contracts.

The bottom line is that consumers want options. Consumers have options. A company that breaks from its industry’s mold and builds a customer-centric business model is the one with the brightest future and long-term growth potential.